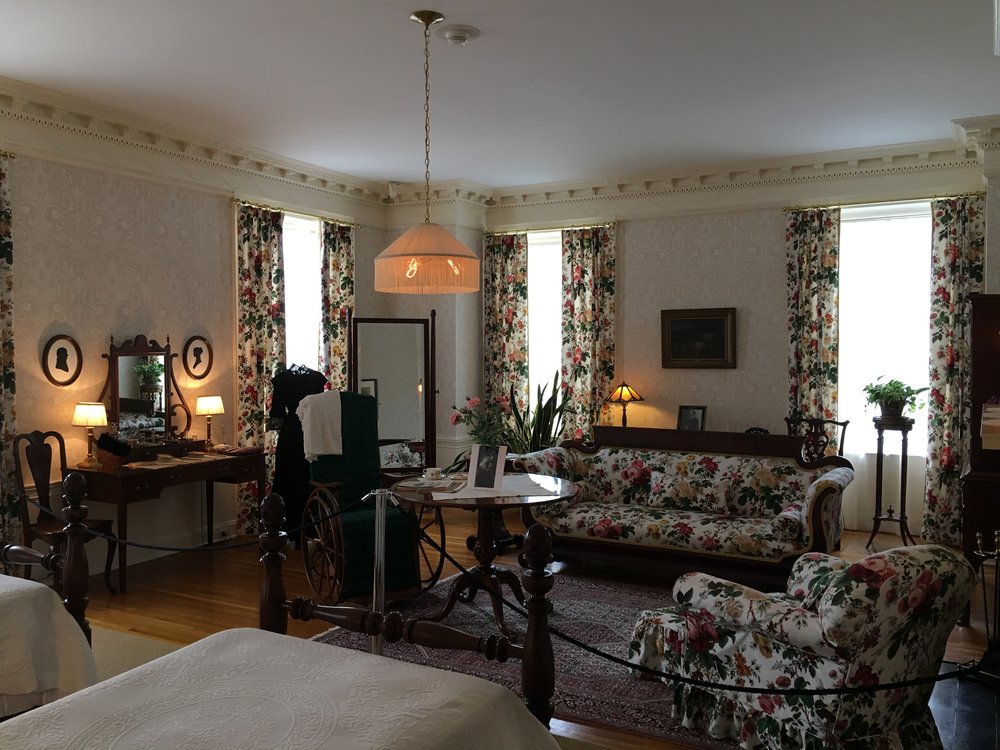 This room belonged George Eastman’s mother, Maria Kilbourn Eastman. A photo of Maria is on the wall as you enter the room.

Mr. Eastman’s mother lived in this house for only two years, from 1905-until her death in 1907. She was confined to a wheelchair during that time having broken her hip a few years before they moved into this house.

George Eastman’s father had died many years before.

The oak wheelchair in the room is vintage and is fitted with a padded seat cushion just like the one his mother used. George Eastman tried to make her room as accessible and attractive as possible. He wanted her to have every luxury and enjoy the last few years of her life as much as possible.

The room is decorated with family photos, books and sewing items belonging to the Eastman family. A framed photo of GE father, George Washing ton Eastman is displayed between the two twin beds. The small framed photo on the fireplace mantle is George Eastman's older sister, Ellen Maria Eastman. No photo exists of George Eastman's other sister Emma Kate. The two silhouettes above the dressing table are of Maria’s parents Mary and Thomas Kilbourn.

George Eastion gave his Mom the room with the best view of the Terrace garden so she could enjoy the seasonal changes in the garden from her windows. Mrs. Eastman loved pink roses so the draperies and upholstery were selected with that in mind. Even though George Eastman had live in nurses for his ailing mother during the last two years of her life Maria’s granddaughter Ellen Andrus Dryden would visit frequently with her grandmother while she was sick and she would use the other twin bed in the room.

Please take some time to look in Maria's restored bathroom and closet. Locate the call button Mrs. Eastman would have pushed if she needed assistance from the household staff.

Vintage clothing similar to what she wore are on display in the closet along with hatboxes and accessories that are typical of the time period.