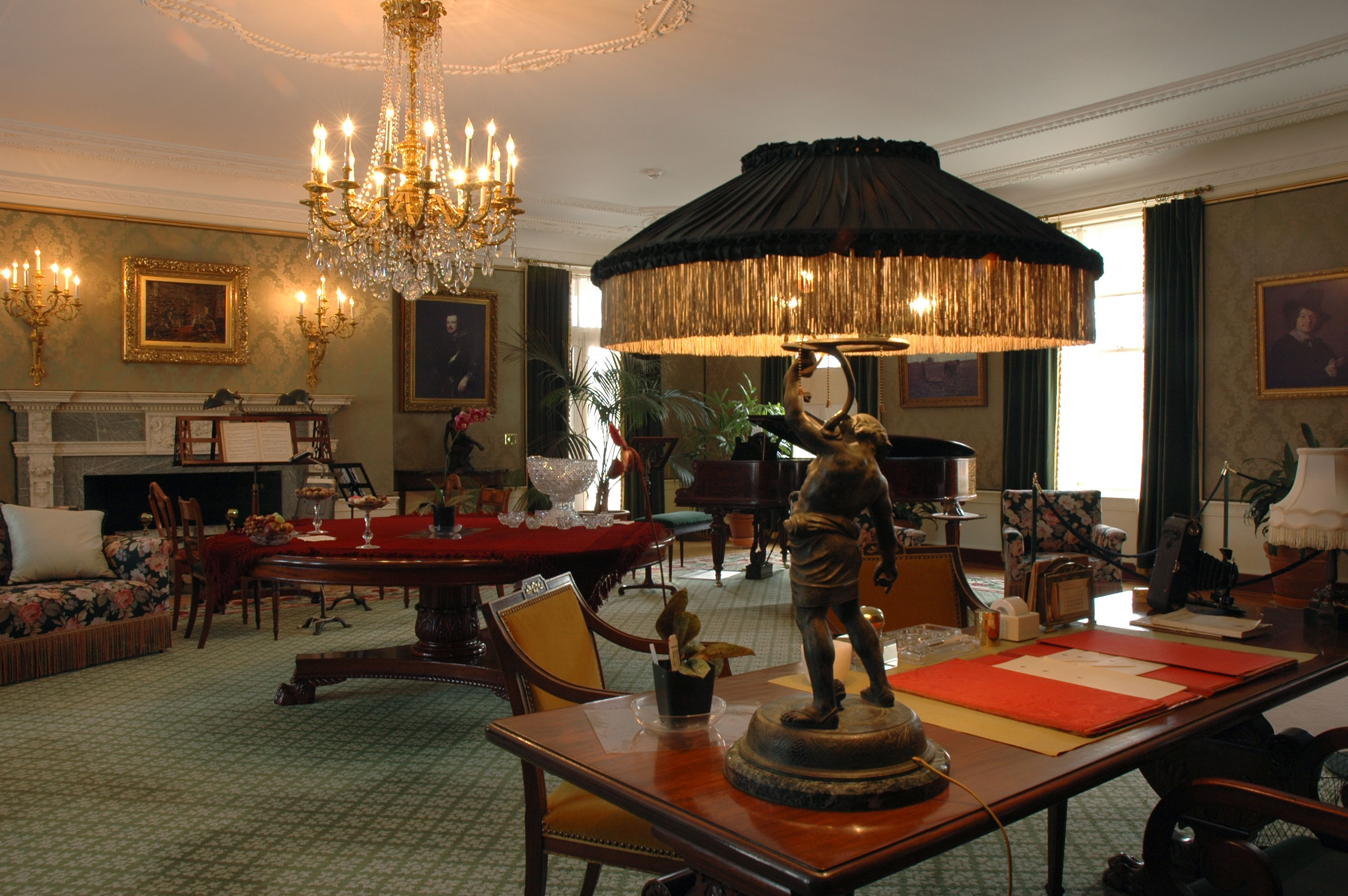 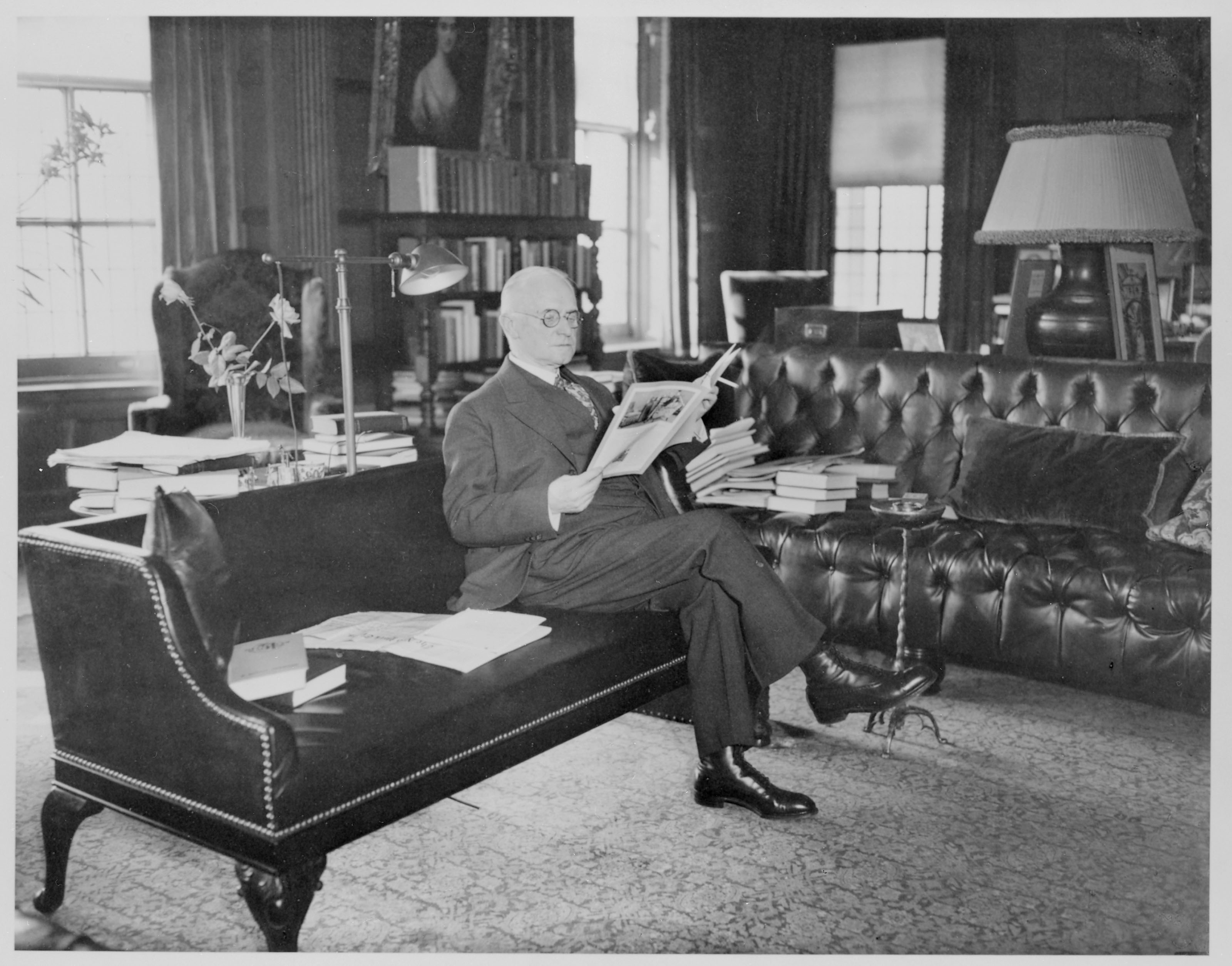 The room was originally designed as two rooms: a living room and a library separated by a wall with back-to-back fireplaces. At the last possible moment, Eastman had the partition removed, resulting in a large room with a disproportionately low ceiling. He continued to refer to the room alternately as the living room and the library. Eastman used the living room for Sunday evening musicales and large community planning sessions for the Chamber of Commerce, hospital boards, the University of Rochester capital fund drive, and others.

The furniture in this room was purchased from A. H. Davenport Company of Boston between 1904 and 1906. Each piece was custom made from drawings by Francis Bacon, Davenport's chief designer. When Bacon broke away to start his own business in 1911, Eastman continued to have him design furniture for him.

Eastman monitored the designs closely for this room. For instance, when Bacon suggested glass doors for the bookcases, Eastman removed them from the plans. In 1926, when the reception room was made into a library, the bookcases were removed from the living room.

From the bay window of the living room Eastman could survey the terrace garden, which was designed as an extension of the house itself.

The Steinway piano was purchased by Eastman in 1900 and moved to this house in June 1905. Bacon designed a bench and new legs that would better match the decor of the new rooms.

The chandelier and lighting fixtures were made by E. F. Caldwell & Co., designers of the premier lighting fixtures in the country. The green silk damask wall covering was ordered through Bacon in 1904 and replaced with a similar hue and pattern through Howe & Rogers of Rochester in 1926.

"Is not the fireplace rather rococo?" Eastman skeptically asked Bacon at one point. But the fireplace stayed, and the mirror above it was replaced in 1907.

Eastman's art collection consisted of European old masters, mostly British and Dutch portraits, nineteenth century French landscapes of the Barbizon School. and their Dutch and American contemporaries. The bulk of his collection, some fifty five works, was bequeathed to the University of Rochester in 1932 and now hangs at the university's Memorial Art Gallery. Many of the paintings at the Eastman House are photographic reproductions of these works.

The portrait of Maria Kilbourn Eastman was painted by Julius Rolshoven between 1 904 and 1 906. It was painted specifically to be hung above the bookcases. Mrs. Eastman broke her hip in December 1904, and though the sittings had to be postponed, Rolshoven continued working from a photograph. When it was finished. Eastman did not think it a good likeness of his mother and asked Rolshoven to "do it over from life." Whether or not this occurred is unknown.

This room was originally planned to be two, but with his usual vision, Mr. Eastman had it made into one – to again incorporate the gardens into the interior – and to provide more space for guests and events. Making it one room also made the elegant ceiling with its four-season medallions possible.

The music stands and grand piano await the next musicale, and the French polished, large Victorian table awaits the next meeting.

Mr. Eastman treated his company employees well, establishing benefits way ahead of the time: a wage dividend, health and retirement plans, as well as one of the first tuition aid plans. He also provided for the long-term good of the community. He established the first Community Chest, now the United Way; the Chamber of Commerce; and the Bureau of Municipal Research, now the Center for Governmental Research. Indeed, many times Chamber of Commerce, Community Chest, hospital, or university board members gathered in this room, and thoughtfully pursued the city’s concerns.

The large portrait over the bookcases is Mr. Eastman’s mother. The art work elsewhere in the room represents Mr. Eastman’s special interest in old master paintings.

The walls are covered in silk damask in Mr. Eastman’s favorite color, green. The fireplace was not his favorite – he considered it “too rococo.”
Fireplaces were not that important, since the house had central heat with individual thermostats in each room; he had them for their aesthetic value and especially enjoyed the coal-burning fireplace in his library. As you leave the room, notice the pocket doors. These, like the walls of the house, are reinforced with steel as a fire safety measure. Closing them would bar any fire from entering or leaving that room. Mr. Eastman was especially attuned to fire safety, since much of his company’s work was around flammable film.

You are welcome now to climb the stairs or take the elevator, with a guard’s assistance, to the second floor.