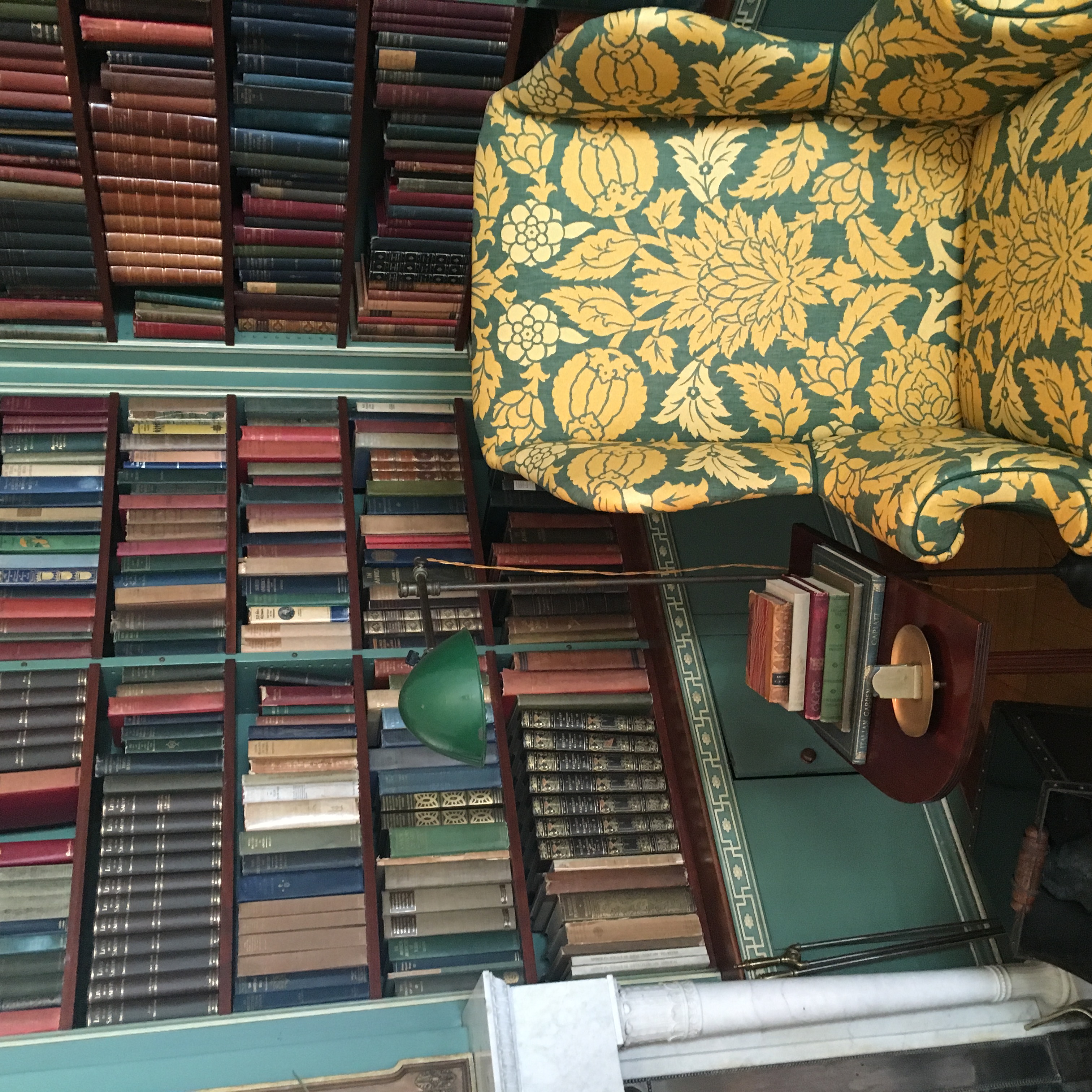 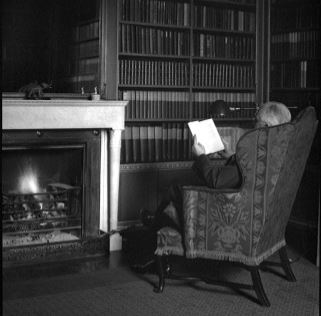 This intimate library was originally a reception room. Although no photographs of it are known to exist, we know from correspondence that it was designed in the manner of Robert Adam, the eighteenth century neo-classical architect. The walls were covered with green silk and hung with water-color painting and engravings. The curtains were made of green velvet.

Late in 1925, Eastman, perhaps at designer Francis Bacon's prodding, decided to remove the bookcases in the living room and change the reception room into a book room. The architectural work was done by Gordon & Kaelber of Rochester, and Bacon designed the furnishings. While Eastman was in Africa for six months beginning March 1926, the new library was completed.

Francis Bacon designed the atlas table, library ladder, curio cabinet, two gold canvas screens, ecru curtains with a green and cream edge, and two wing chairs covered in green brocatelle. He drew Venetian printers' marks to be carved in the door jambs and an elephant shot by bow and arrow to be carved as oval panels over the doors. Eastman stated, "I substituted a rhinoceros and a lion, which I killed, for the elephant which I did not kill and the bow and arrow which I did not use," and chastised Bacon for drawing an Asian and not an African elephant. The printers' marks, rhino, and lion were carved in low relief by the A. W. Hapeman Co. of Rochester. The animal carvings were derived from Eastman's photos.

Eastman chose the "scientific" lighting fixture to provide light that would bounce off the ceiling as well as shine down upon the atlas table. It replaced a Caldwell chandelier that had been installed in 1904.

"I shot that table myself," Eastman told a visiting journalist. referring to the atlas table covered by hippo hide. Undoubtedly he shot the vase too, which was made from a foot and was often filled with flowers.

The curio cabinet contains netsukes. which Eastman began to collect in 1905 at the urging of his childhood friend Frank L. Babbott, president of the Brooklyn Institute. Eastman went to Japan in 1920, and many of the netsukes may be from that trip.

Four dozen bookends were made at Kodak's Camera Works, and Eastman was photographed for a bookplate. Deciding that he "did not want to see a likeness of myself in every book I own," he cropped his head from the finished bookplate. A librarian from the University of Rochester cataloged his books and inserted the plates in 1927. The library had been previously cataloged in 1911.

Before World War I, Mr. Eastman’s guests would arrive promptly, 15 minutes before dinner, and would gather here. After the war and with the end of Prohibition, the cocktail hour had come into style, and arriving guests gathered in the living room. Adapting to the change, Mr. Eastman had his bookshelves moved into this room, and it became his library.

Mr. Eastman was a self-taught man. The books cover every subject from history to poetry, and because he was so meticulous, they were carefully catalogued and systematically arranged on the shelves. We know the books on these shelves were

Above the doors are two beautifully carved images of a rhino and a lion. These were created from photos taken by Mr. Eastman while on safari.
Again, it’s a very personal room, and many people feel closer to George Eastman here than in any other room of the house.

From this room, step into the front hall.