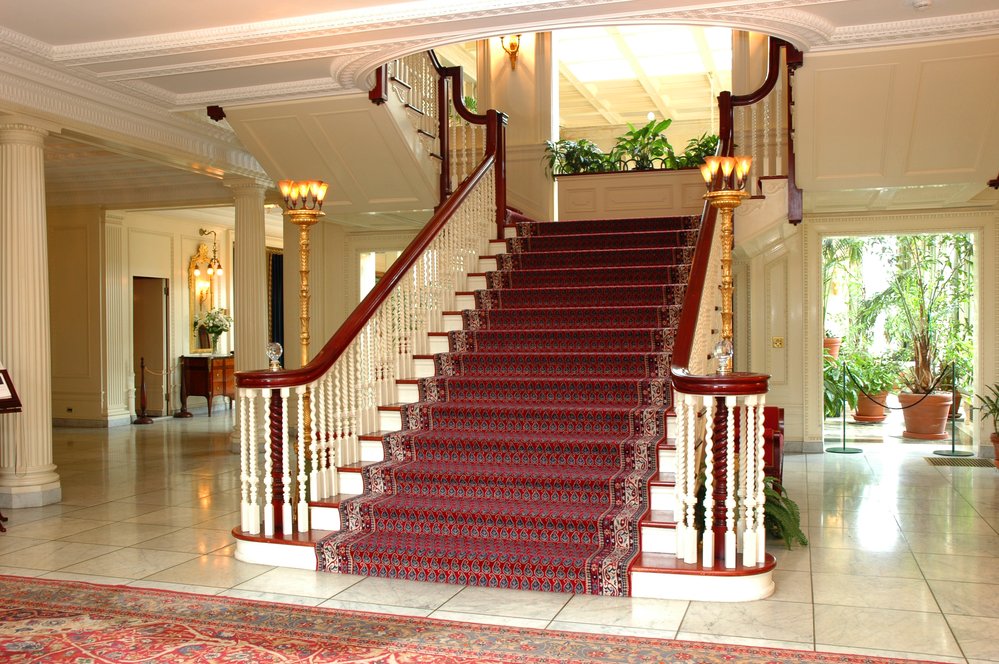 The hall is where Eastman and his architects, J. Foster Warner and William Mead of McKim, Mead & White, converged  to further the Colonial theme Eastman chose for his house. Eastman put Mead in charge "of the treatment of the main hallway," and the New York architect engineered a flying staircase silhouetted against the natural light pouring into the conservatory. This combination, stair and conservatory, is the focal point of the house.

French doors and windows originally separated the hall from the conservatory on both levels but were removed during Eastman's lifetime. The pine-paneled hall has been painted its original warm "colonial" white. The floor is white Norwegian and light Swiss cippoline marble with inlaid brass strips.

The balusters and handrail are nearly identical to those  Warner used in the house he designed in 1901 for Eastman's attorney, Walter Hubbell, at what is now 1296 East Avenue.  Hubbell's stair is half the size of Eastman's and is confined against a wall.

The clock was designed by Francis Bacon of the A. H. Davenport Co. Drawings were made of all the furniture Bacon designed. Often Eastman would ask for an additional "pencil sketch" showing an "end view" of a particular piece of furniture he was considering.

Gilded mirrors were designed by Bacon and made by Davenport, but the present ones are modern reproductions, made with the aid of photographs of the originals.

The French console table was actually designed for the living room, but Eastman could not find any piece he wanted for the hall, so he moved the console there. He stated, "[I) find that it is just what I want; so I shall probably leave it there and buy something else for the library."

The flying staircase, silhouetted against the light from the conservatory, is a true focal point and breathtaking use of space. Its beauty is complemented by the white marble floor with inlaid brass strips. Take a look at the unusual light fixtures by the front door and flanking the staircase. The grandfather clock, the console and settee keep the area grounded. For a special view of the magical space, one that’s most often photographed, go around to the left of the staircase where the organ roll player is and look up to the oval skylight and the light of the third floor.

Next, join me in the living room, across the hall from the library.