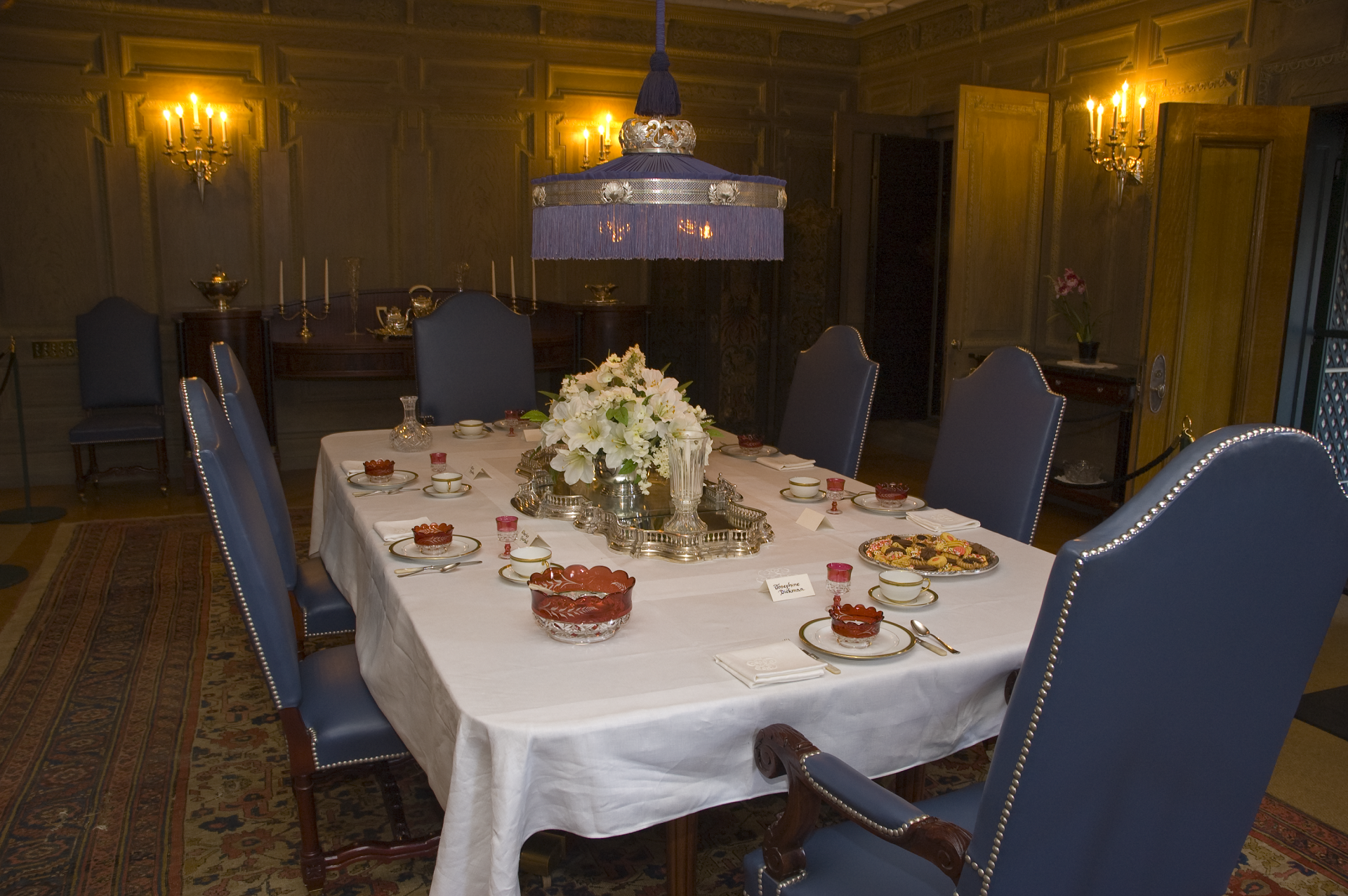 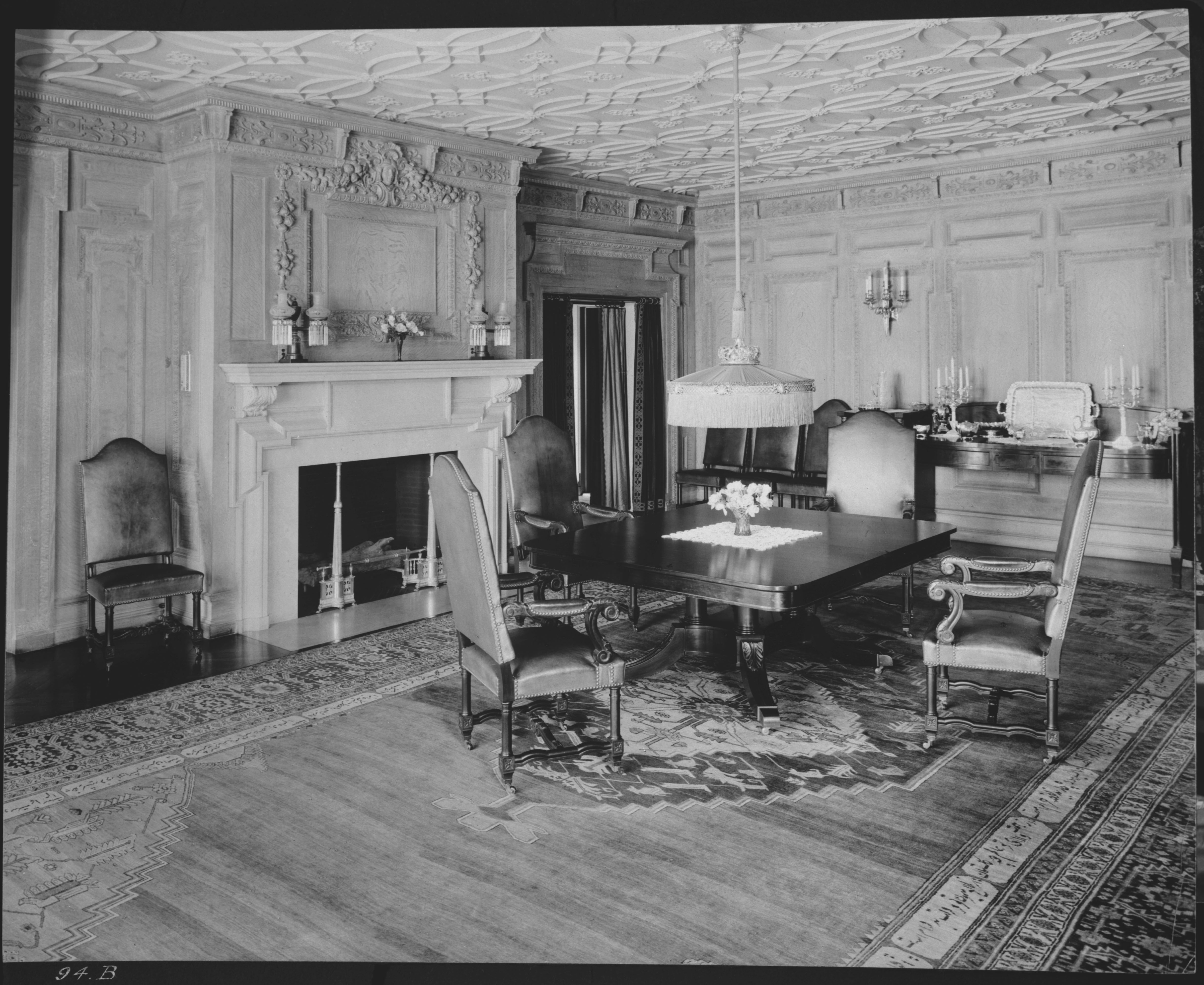 The dining room was designed in 1903 by McKim, Mead & White, the firm responsible for designing all the public rooms of Eastman’s house. The New York architects had just refurnished the public rooms of the White House in Washington D.C. for Theodore Roosevelt. Hence, the Eastman dining room bears a strong resemblance to the State Dining Room. The extension table and the leather chairs were, in both cases, designed by Francis Bacon and made by A.H. Davenport Co.

Originally the bay window featured built-in seats and a round breakfast table. Eastman was particularly pleased to find that the breakfast table was an inch higher than the dining table, thus allowing his mother’s wheelchair to fit comfortably, without her moving to another chair.

Thomas Wadelton, well known for his massive furniture designs for the University Club in New York City, crafted the American oak paneling with “Antique Gray Finish.” Because the building of the house was delayed by a year, Wadelton insisted that Eastman insure the finished paneling against fire damage while it sat in his shop.

Although the inspiration for the room is Georgian England, the ceiling was designed of Gothic strapwork, the chairs were of “bronzed” blue leather, and the drapes were made of blue velvet with gold trim.

The rug for this room was Persian, in hues of blue and rose, with an Arabic prayer around its border. The present rug is original to the house but was not located in this room. Kent-Kostigyan of New York, from whom Eastman had purchased the rug, periodically sent men with vegetable dyes and water-color brushes to “paint” the rug and renew its color.

Originally a window separated the dining room from the conservatory. In 1910 the window was changed to a door by architect Edwin Gordon. From that time on, Gordon and Kaelber were Eastman’s principal architects. It was they who engineered cutting the house in half in 1919 to enlarge the conservatory. They also designed the Rochester Dental Dispensary (located at 800 East Main Street) and City Hospital (now Rochester General) in 1915, the School of Medicine and Dentistry of the University of Rochester in 1920, the Eastman Theatre and the Eastman School of Music in 1921, the River Campus of the University of Rochester in 1925, and in 1930, the top three floors of Kodak Office.

The girandoles, ornamental candlesticks, located on the mantel came from Edward F. Caldwell & Co, “makers of gas and electric light fixtures,” as its letterhead noted. Like Bacon, Caldwell sent reams of drawings of light fixtures from which Eastman could choose. Caldwell continued to design fixtures for Eastman into the 1920s, including those for the Eastman Theatre.

The female figure with cascading fruit over the mantle of the fireplace conveys a feeling of opulence and luxury and may represent the ancient goddess Artemis (“Diana of the Ephesians”) found at the ruins of Ephesus in Western Turkey. Bacon was an archeologist as well as an architect and furniture designer. He worked on the Assos dig on the west coast of Turkey from 1881 to 1883. He probably saw and was influenced by the finds at nearby Ephesus, particularly the temple of Artemis, one of the seven wonders of the ancient world.

If you were invited to an event at Mr. Eastman’s home, you would not have entered the way we have. You would have arrived at the covered driveway, the porte-cochere, at the side of the house, entered that door, taken your hat and coat to an upstairs room, and made a grand entrance down the elegant stairway at the front of the house. Mr. Eastman and his hostess would have greeted you at the bottom of the staircase … and presented each of the ladies in your party with an orchid corsage.

After a weekly chamber music concert or a seasonal celebration, dinner was served in this sedate dining room. It, like the house, was designed by McKim, Mead & White, interior designers for Theodora Roosevelt’s White House renovations, and the dining room resembles the State Dining Room at the White House in Roosevelt’s day. The table and chairs were made by the A. H. Davenport Company in Boston, who designed and constructed most of the furniture you will see in the house.

The American Oak paneling with antique gray finish makes a complementary background for the rich blues of the furnishing … and the silver of the wall sconces and the chandelier. Table silver was kept in a vault in the closet on the far corner of the room. You can see into it from the doorway on the opposite side of the room.

Eighty-five percent of the furniture in the house today was Mr. Eastman’s. They are pieces he chose and enjoyed. Photos have made it possible to place each piece where Mr. Eastman liked it to be. The china and crystal on the table was actually used for his entertaining, and presently is on loan from Mr. Eastman’s relatives.

It was at this table that in 1924 Mr. Eastman signed away the bulk of his fortune to four institutes of learning: Massachusetts Institute of Technology, the University of

Rochester, and the Tuskegee and Hampton Institutes. Giving so handsomely to the latter two made Mr. Eastman, at that time, the largest contributor to African-American education in the world. When all the papers were signed, Mr. Eastman said, “Gentlemen, now I feel better.”

Mr. Eastman liked to see his money put to effective use. In his lifetime, he gave more than $100,000,000 to education and to establishing hospitals and dental health centers around the world. In Rochester, he touched, and continues to touch the community, through his gifts of city parks and a wonderful musical heritage.

Mr. Eastman and his mother often ate here, sitting so they faced the gardens. Mrs. Eastman had fallen and broken her hip before the house was finished, and died just two years after they made it their home. After her death, Mr. Eastman took his meals in the conservatory, the room you will see next.