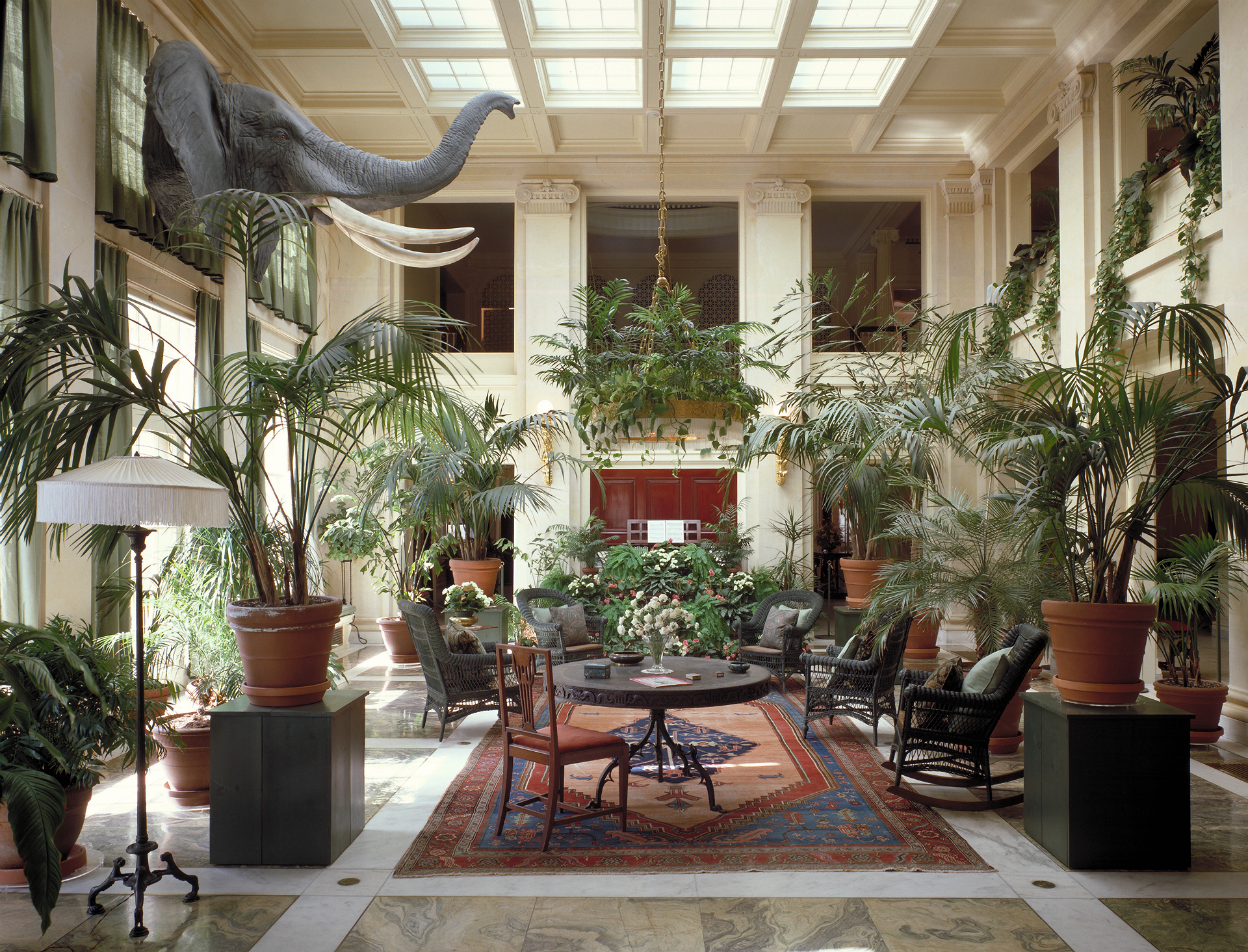 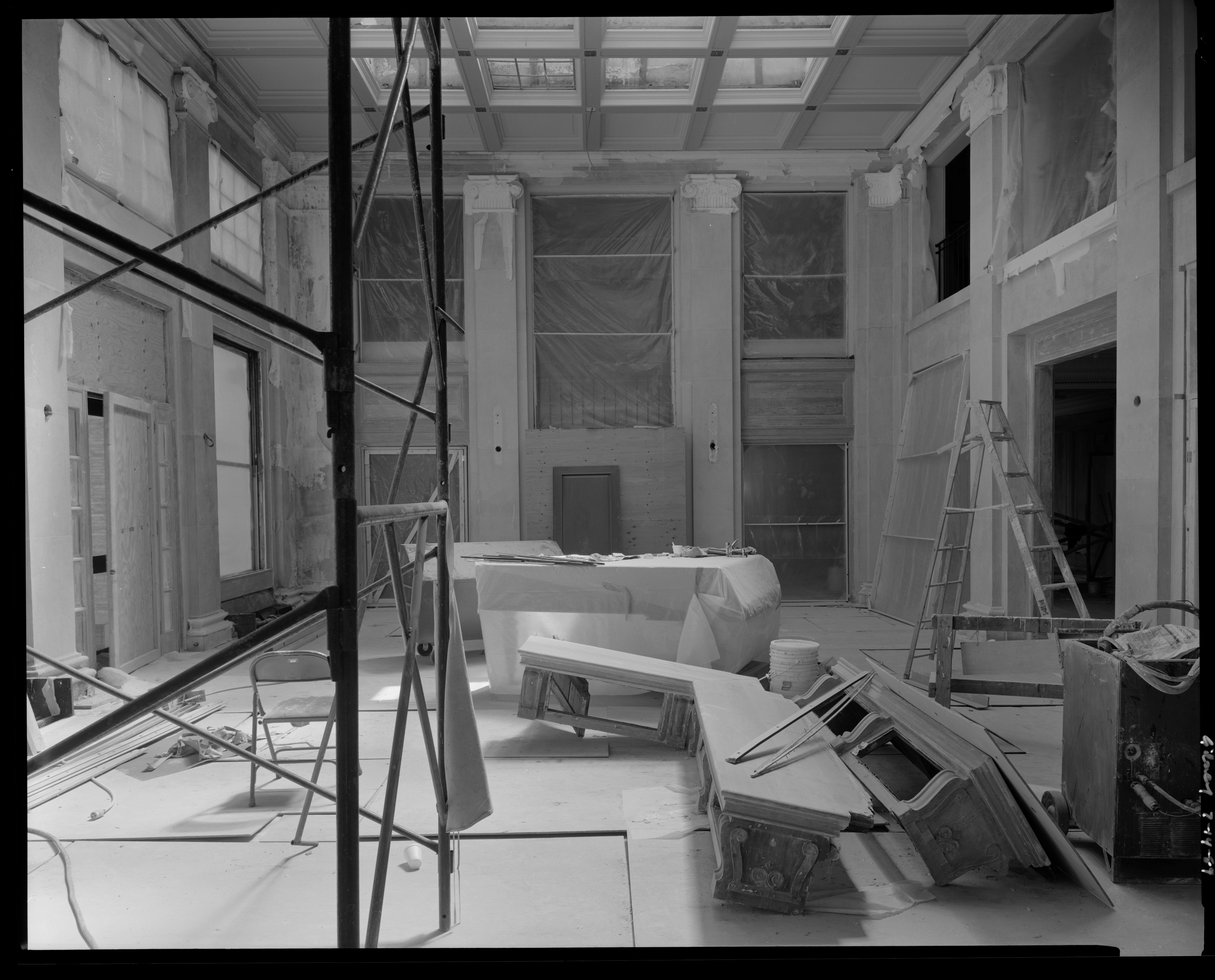 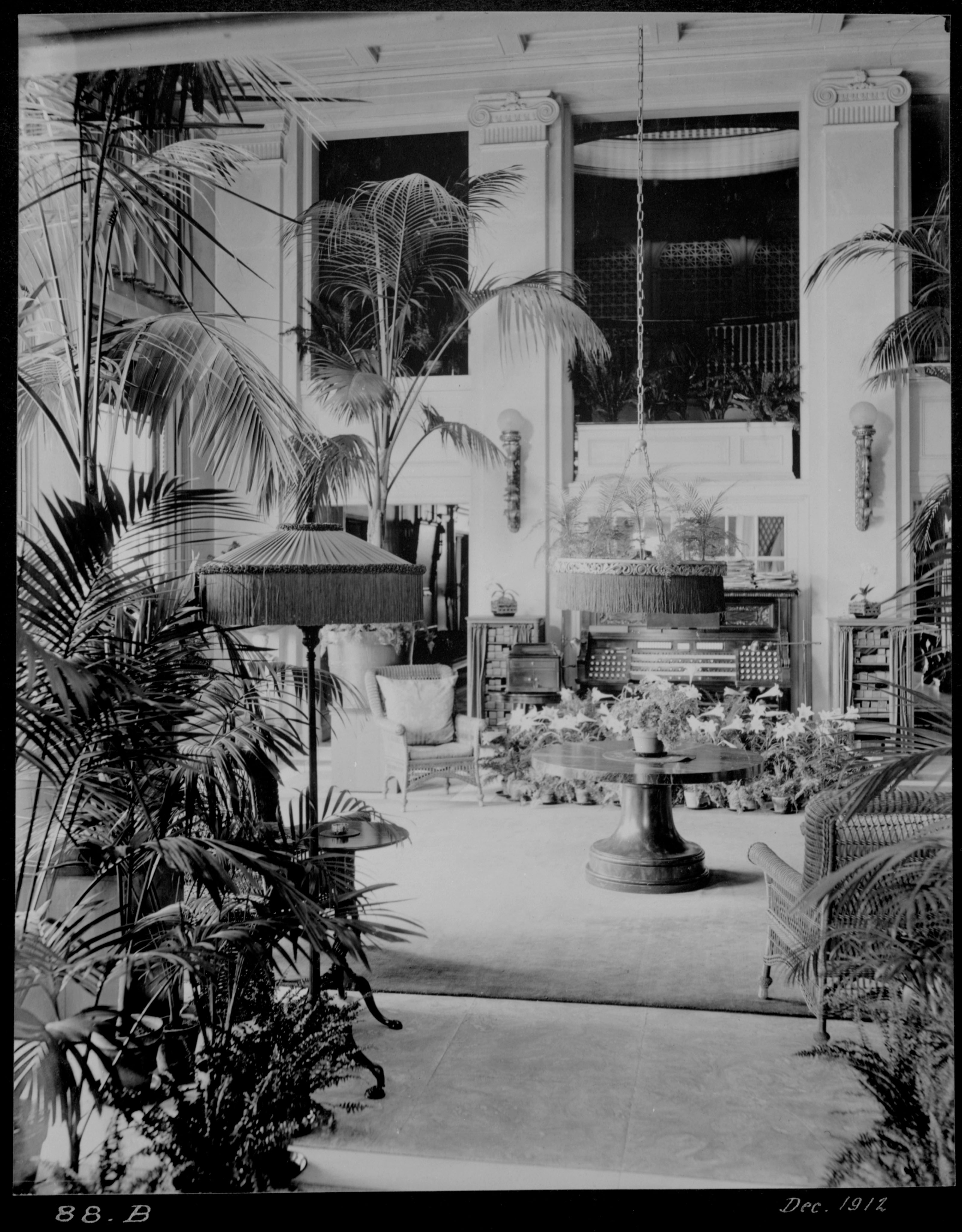 This room functions as a conservatory in two respects: it is a place both for displaying plants and for enjoying music. George Eastman often referred to it as "my music room."  Originally the conservatory was furnished with wicker chairs, and the walls were covered with dark green lattice.

The wicker furniture came from Eastman’s former house, known as Soule House at 400 (now 1050) East Avenue. The chairs remained into the 1920s even though designer Francis Bacon urged Eastman to replace the wicker and hanging basket light fixture.

In the 1920s Eastman entrusted the decoration of the conservatory to former Rochesterian Elizabeth Averell Rogerson, cousin to James Averell, in whose memory the Memorial Art Gallery was given. It was she who counseled Eastman to replace the lattice with the grilles by Samuel Yellin. She also suggested that he buy a few hundred canvas camp chairs for his Sunday evening musicales, which he did. In 1924, from designs first prepared by Carl Schmidt of Gordon & Kaelber, iron grilles for the walls were forged by Samuel Yellin. a nationally known metal worker whose larger commissions made him the first craftsman in America to be honored with a medal from the American Institute of Architects. Two of the grilles covered sound filters from the second floor where the new organ pipes were installed.

In 1928, on his second African safari, Eastman shot an elephant that had only one tusk. Two wooden tusks were made for the mounted head, and the original ivory tusk was displayed as it is now shown in this room.

In 1899, in his former home, Eastman had installed an Aeolian pump organ with a self-playing attachment. About 1904, he decided to install an organ in his new home. One visiting organist later called this new organ, "a tonal and mechanical wonder . . . the last word in organ building and in many respects absolutely unique." In 1918-19, a new four-manual Aeolian solo organ was installed in the room above the dining room. Both organs could be played from one central console. Special stairs and scaffolding were built to bring in seventy ranks of pipes.

George Eastman's Aeolian pipe organ functioned as his alarm clock. At exactly 7:30 a.m. on weekdays and 8:00 a.m. on Sundays, his bedroom door opened, and he descended the grand stairs surrounded by music.

The conservatory was designed in 1905 by architect J. Foster warner as a giant cube, 30' x 30' and two stories tall. But Eastman "found it too nearly square," and as early as 1910 was contemplating ways of enlarging the room without destroying the silhouette of the exterior of the house or the layout of the terrace garden. Finally in 1919, he decided to cut the house in half between the conservatory and the dining room, rolling the rear half back nine feet four inches on railroad tracks. "They cut a piece out of the covered walk," he reported to a friend, "and shoved the whole thing along to fill the gap." It took five weeks to jack up the rear wing, weighing 2,500 tons, and eight hours to move it along the tracks.

When the house-cutting project was complete, architect William G. Kaelber, who thought Eastman "was foolish to conduct such an expensive operation to get only nine feet," admitted that he had "received a lesson in proportion." A slight difference in the grain of the marble floor is the only indication of where this new bay was inserted.

You need to have a full view of this beautiful, two-story room, full of light and greenery, that reflects so much of Mr. Eastman’s life-long interests. At the end of the room, behind the fernery, is an Aeolian organ. Look up and you will see that the pipes extend behind the lattice work on the second floor. In actuality, they extend even further to the third floor. Mr. Eastman was interested in “heavy, rolling cathedral tones,” and that’s what he had.

An organist, Harold Gleason, was hired to play every day beginning at 7:30 AM in the morning during the week, and at 8:00 AM on the weekends. Mr. Eastman came down to breakfast to music -- music that filled the house. He often invited guests for breakfast, and the organist accompanied their talk with music. Musicales would conclude with after-dinner entertainment, in the conservatory. The night would usually end with a spectacular organ solo, with the whole house as the sound chamber. Mr. Eastman’s favorite was Gounod’s “Marche Romaine.” He asked that the organist play it at the end of his funeral service. His exact words were, “ … we’ll give them hell, Harold, when they carry me out the front door.”

With his usual inventiveness, Mr. Eastman had the first remote control! He had a player piano mechanism attached to the organ, and with a remote panel he could turn the music on from his bedroom or the library. With a radio and a gramophone added for his entertainment, music always signaled to the staff that Mr. Eastman had arrived home. Though people were critical of his choices in music (Wagner and no Bach, please) and often thought he never really understood music, it was a certainty that it was important to his well being and to his spirit.