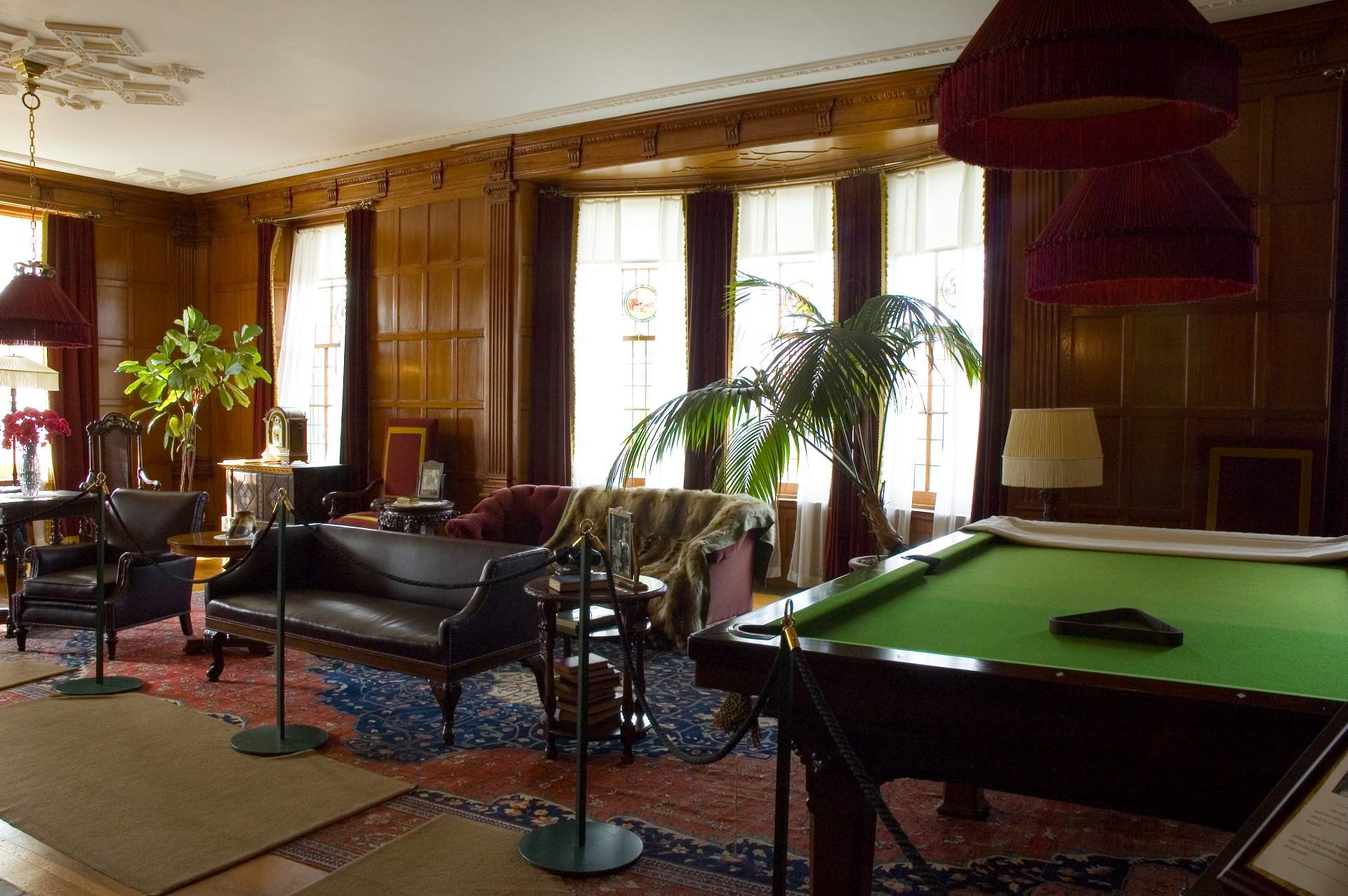 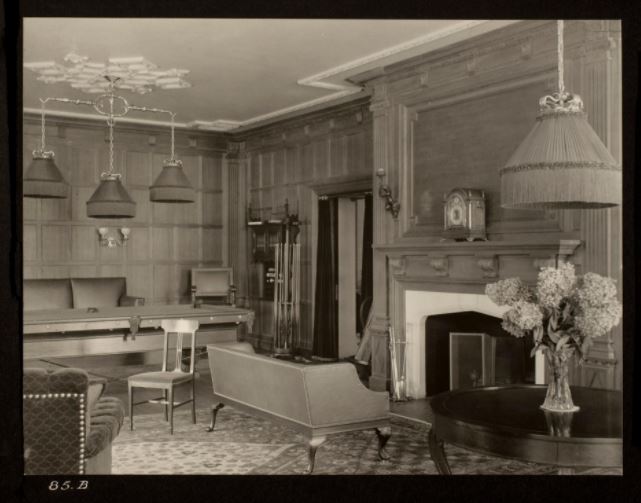 This large sitting room was originally planned as a billiard room. Since 1892 George Eastman had owned a billiard table in his other homes. He was considered quite proficient at the game.

Francis Bacon designed all the original furnishings, including the teak paneling and the fireplace. The floor is also made of teak, and butterfly pegs instead of nails were used to join the boards.

The original billiard table was ordered from Brunswick-Balke-Collender of Syracuse. Francis Bacon, head designer for the A. H. Davenport Co .. designed its legs (at Eastman's sug-gestion and to Eastman's sketch) to match the panels of the pilasters on either side of the fireplace.

Leaded glass roundels depicting "various modes of conveyance" were originally to be designed by John La Farge, the premier stained glass artist of the period. In the end. Francis Bacon was selected to design them. and A. H. Dave!lport Co. produced them.

At Eastman's request, a storage compartment for the house's vacuum cleaning apparatus was built into the platform on which the leather "davenport" (named after its maker, the A. H. Davenport Co.) rests. Special vacuum attachments were designed by the architect of the house, J. Foster warner of Rochester, to clean the organ and the horses in the stable.

As his painting collection grew, Eastman devoted his sitting room walls to his collection of British portraits. His interest in these cool and reserved portraits, which seem to mirror his own personality, may have been 'piqued during the 1890s, during which time he spent up to six months each year in London.

The paintings illustrated at right are (left to right) "Portrait of Mrs. Johnston of Straiton" by Sir Henry Raeburn, Corot's "La Mare Aux Deux Paysannes," and the unfinished "Portrait of Lady Maitland" by George Romney.

In addition to the paintings, photographs of his grand- niece (Ellen Maria Dryden), his mother, and King Gustav V of Sweden were stacked on Eastman's desk and the mantel. The crown prince of Sweden was a guest in his home in 1927, and in 1931 he funded an Eastman Dental Clinic to be built in Stockholm.

Photographing himself and his friends in the billiard room was a hobby of Eastman's. The photograph of Eastman was taken on May 27, 1908. The one of Josephine  Dickman, a close personal friend of Eastman's, was taken at least a year earlier.

The billiard room became a sitting room shortly after the death of Eastman’s mother, Maria Kilbourn Eastman, in June 1907. Eastman then moved the billiard table to her former bedroom on the second floor. In 1919 he donated the table to the World War I Aeronautical School at Kodak Park. After the war the table went (with Eastman’s approval) tothe new Maplewood branch of the YMCA, for which Eastman had donated land. Its whereabouts since then are not known. This table is original to a home at 1906 East Avenue.

This room was always the heart of the house. Here George Eastman entertained twelve to twenty of his closest friends before Wednesday evening dinners and musicales. Here he would also head after the workday, letting himself in by the side door under the porte cochere. The household staff knew he was home when they heard sounds from his radio, player piano, or Edison phonograph.

Mr. Eastman had many famous guests. Among them Admiral Richard Byrd, Adolph Ochs of the New York Times, General John J. Pershing, and Crown Prince Gustaf Adolf of Sweden, not to mention silent screen star Mary Pickford, Booker T. Washington, and Thomas Edison. When friends came to visit, there was often a game of billiards. In the cue stand, you’ll find Mr. Eastman’s cue stick with his name etched in mother-of-pearl at the base. The davenport on the raised flooring enabled game-watchers to see better.

Not to waste a bit of space, Mr. Eastman had a large drawer built into the raised section to hold the attachments for the central vacuum system.

In 1908, the billiard table was moved upstairs and the room became a sitting room with homey touches of family photos on the mantel, a gramophone, and a radio. The colorful hand-painted roundels in the windows represent the many means of transportation at the turn of the century … missing, or course, the airplane.

The blanket chest in the corner of the room was a gift from Czar Nicholas, perhaps given in gratitude for the photographic advances Mr. Eastman had made possible in Russia. The room, with its fine teak walls and floor with butterfly joints like the decks of old ships, is cozier than the conservatory. It was a fine place to entertain friends.