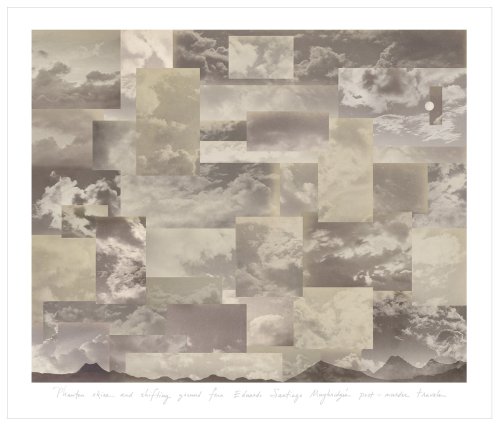 Next Stop
Return to Home

My name is Byron Wolfe. The photograph titled Phantom skies and shifting ground from Eduardo Santiago Muybridge's post-murder travels is a collage picture that consists of selections from cloud photographs that Edward Muybridge added to his scenic landscape views. Many of the same clouds appeared in completely different prints often made in different locations in Central America.

One question I thought about a great deal while researching Muybridge's constructed images was why do his fake clouds matter? My answer is that there are a couple of things at play.

The first is that added clouds are an aesthetic intervention to compensate for perceived shortcomings. Photographs with plain skies were deemed insufficient. No matter that it was a consequence of the properties of photographic materials of the time. We might think this attitude about the importance of images with the right set of clouds is limited to nineteenth century notions. But even today technology companies like Adobe actively create software to make it easy to swap out skies for a specific visual effect.

The second reason the fake clouds matter is that we have an expectation for photographs to convey some version of truth. Maybe because they're mechanically derived in combination with light and chemistry. We want in fact we often expect the photographs will shows the presence of something that was real not the absence of something elusive.

I like to think the photographs aren't so much a depiction of reality but are instead physical objects that embody ideas and opinions. Clouds are rather photographs of clouds can sometimes reveal something about what we value and what we wish for in our world.