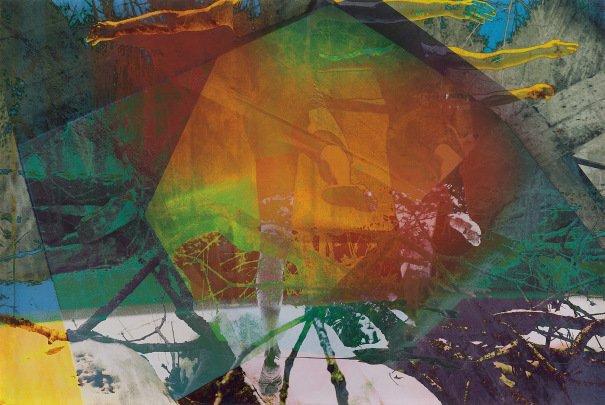 I photographed the company on an extremely hot night in Philadelphia in July. When I was there, Lucinda came up to me and was pointing out different places to stand where she thought I could get the best pictures, and I was very grateful to her because she clued me into this this view that I would get as the dancers were receding away from me.

I took this picture and then tried it with all sorts of different backgrounds and eventually I kept the snow scene, which is a kind of tangled mass of branches and brambles and a little bit of the sky at the top, and I combined that with the series of dancers disappearing into the photograph with their arms are raised. And the third image that I used was of a building that I've never been to but which I sent an assistant to go photograph. It's the Goetheanum by Rudolf Steiner.

For me, Goethe and his idea pathological color is very important to Choreograph. The word comes from this theory of colors where he identifies normal color and pathological color, color blindness, abnormalities of the eye, but I think it's a great term to describe what's now possible with digital technology and ink jet printers.

Following the lead that say psychedelic photography from the 1960s started, which I saw when I was a teenager, I've become very interested in using more color channels than just a red, green and blue, which are traditional and the way we see and the way all color works are reproduced.

And so by putting the Goetheanum with a landscape and this dance typify or epitomize all of the things that I want choreographed to express: intense color, reds, yellows, blues, really the spectrum is in this picture; with an intense dance.

9910 brings together the elements that create Choreograph the formal elements as well as some of the conceptual elements.