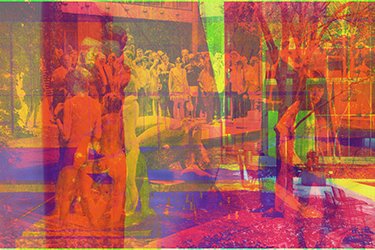 I'm James Welling and this is my show Choreograph. In 2012, I was approached by the Museum of Modern Art to be part of a group of 10 photographers who would document the Museum of Modern Art sculpture garden for an upcoming publication. I was already interested in working with dance imagery, so I went to the archives at the museum and looked through archival photographs of dance performances.

One of the most striking performances in the sculpture garden was an action that Kusama the Japanese artist living in New York performed in 1969, where she and a group of performers disrobed and frolicked in the museum's water fountains.

I used the archival photograph of the performance with two of my own pictures that I took of the same areas of the sculpture garden, and I combined them in Photoshop using each black and white photograph in a different color channel. Kusama is the beginning of choreograph.